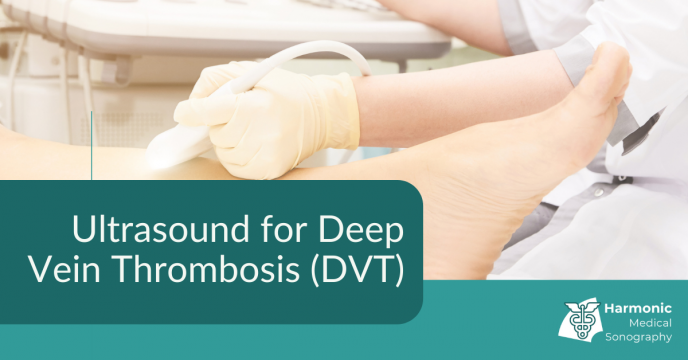 It’s made up of proteins and platelets. Platelets are one of the three major types of blood cells. They help your blood clot and control bleeding.

Several different things can cause a DVT.

While there are several symptoms of a DVT, imaging is usually necessary to diagnose the condition and locate the clot. An ultrasound is one commonly used test to confirm whether a blood clot — or some other health problems — is causing your symptoms.

Based on your symptoms and your medical history, your healthcare provider may recommend an ultrasound or another test to help diagnose a suspected DVT.

An ultrasound uses sound waves to create moving images of blood flowing through your veins and arteries. Unlike an X-ray, for example, an ultrasound does not use any radiation.

During an ultrasound procedure, you’ll wear a hospital gown and be covered by a sheet. Only the leg being evaluated will be exposed. The head of the bed should be at a 30- to 45-degree angle to help force more blood flow down to your legs.

Depending on where the clot is likely to be, you’ll rest your leg at an angle that’s comfortable for you, but also allows the ultrasound technician or the doctor to move the ultrasound “wand” or probe easily on the surface of your leg.

A common location for DVT is behind the knee, but a clot can form in any of the deep blood vessels.

Ultrasound gel will be rubbed across a wide area of your leg. The gel is safe and painless.

The probe is moved slowly and gently across your leg, allowing sound waves to penetrate the skin to the blood vessels and tissue underneath. The waves form images that appear on a computer screen nearby. When a DVT is identified, a still picture of it can be made.

The person doing the ultrasound may want to get a few angles of the DVT to better understand its size and location. The procedure should take less than 20 minutes.

After the test, the ultrasound gel will be cleaned off of your leg. Our qualified sonographer will prepare a report for your GP or recommend you to the hospital if a serious blood clot is identified.

A thrombus that moves toward the heart can be a serious health risk. A blood clot that moves to the heart and then into the lungs is called a pulmonary embolism (PE). It can be life threatening so it is important to identify them as soon as possible.

According to the National Blood Clot Alliance, an ultrasound finds about 95 percent of DVTs in the large veins above the knee. Usually, no other test is required if a clot is identified through ultrasound.

Our sonographers are experienced in identifying DVT through ultrasound. Don’t hesitate to enquire about an appointment if you are concerned you may have one or would like to monitor your condition.