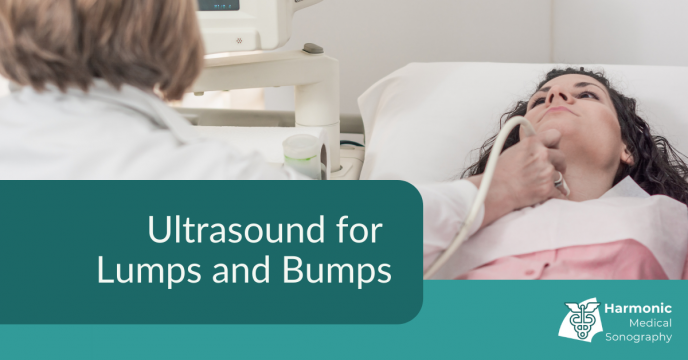 Ultrasound Scans for Lumps and Bumps

Although they are usually harmless, finding a lump can be concerning. The most common types of lumps are cysts and tumours. A cyst is a small sac filled with air, fluid, or other material. A tumour is an unusual area of extra tissue. Both can be found in your skin, tissue, organs, and bones.

It’s important to determine what type of lump you have since cysts are mostly benign, while tumours can be either benign or malignant. Benign tumors tend to stay in one place, but malignant tumors can spread to other parts of your body.

Ultrasound imaging can help determine the composition of lump, distinguishing between a cyst and a tumour. Also known as sonography, it involves the use of high-frequency, real-time sound waves to create an image. A small transducer (probe) both transmits sound waves into the body and records the waves that echo back. Sound waves travel into the area being examined until they hit a boundary between tissues, such as between fluid and soft tissue, or soft tissue and bone. At these boundaries some of the sound waves are reflected back to the probe, while others travel further until they reach another boundary and are reflected back. Since the pitch, direction, and distance sound waves travel differ depending on the boundary they run into, a computer can interpret this information as a two-dimensional image on a screen.

The shape and intensity of the echoes depend on whether the area absorbs or transmits the sound waves. For example, most waves pass through a fluid-filled cyst and send back very few or faint echoes, which look black on the display screen. On the other hand, waves will bounce off a solid tumor, creating a pattern of echoes that the computer will interpret as a lighter-colored image. Air and bone also reflect sound waves.

Most tumours are benign. Ultrasound can usually help differentiate between benign and malignant tumours based on shape, location, and a number of other sonographic characteristics. If the ultrasound is inconclusive, your doctor may request follow-up ultrasound to monitor the tumour or a radiologist may recommend a biopsy.

At Harmonic Medical Sonography our clinical team are trained to look for these lumps and masses. A thorough diagnosis and early detection can aid in the appropriate treatment course.

Contact us here to make an appointment or discuss any concerns you may have.

There are no comments yet, why not be the first